Am I becoming a bore about the whale? I accept that you are all probably sick of hearing about water systems, sunsets and tomatoes but admit it, talking about our new resident humpback whale has got to be a reprieve from covid statistics or one more ignorant quote from that moron in the country below us.

And so … my day with a whale 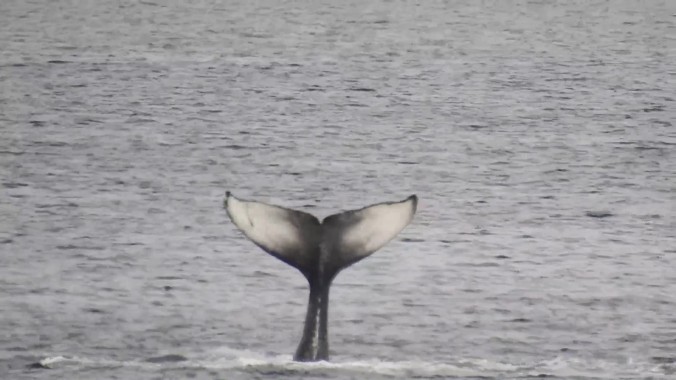 I sat down with my coffee at 6:30. Bobby, the whale swam north in front of me almost immediately.. Hmmm I thought.. Where does he actually sleep?

At 8:30 when E was walking the dog, I noticed Bobby swimming just under the deck, again heading north.. He seems to be swimming circles in the channel in front of us. To those of you who know the island, he swims from one end of Link to Morris’s and then back.. sometimes over as far as BH but usually up the centre and then down close to us…

I put my ipad set to video and trained on where I had last seen him. I waited for him to come up again. His normal routine for the last week has been three up and downs and then he disappears. Often there is no sight of him for five minutes, some times for two or three hours. Bobby (as I call him) hadn’t put on a big show which included breaching etc. Yet.

Within minutes from my seeing him just in front of our little deck there was a loud splash over near Link, halfway to Mudge. I went out in my pajamas and watched his first incredible display. He breached three times. After the third, I took advantage of a pause in activity to get my camera. There was much tail slapping which I was able to get on video. However, I had missed capturing the breaches on film.

If Bobby  is going to hang around, we are determined to catch the next show on video. But it’s hard.. You just cannot predict when he is just moseying by or when he is feeding. That being said, the entire reason for our house renovation was to be able to take advantage of this kind of opportunity in front of our house and we appreciate any sightings at all.

My neighbour reported seeing four porpoises just before we saw Bobby breach this morning. So was there a delicious school of fish swimming by which both porpoise and humpback find yummy? I suspect, when he was slapping his tail on the water he was killing the shit out of tonight’s dinner.

Soooo… anyways.. I spent my day watching Bobby swim back and forth and got absolutely nothing else done.. and yes I am still