Construction continues during the winter months even when most of the islanders are gone. Thankfully, everything E and I need is here now and we aren’t so much constructing as puttering. But we have family on two other properties and they are both deep in the throes of renovation. The process of getting supplies is cumbersome to build anything on this island.

There is a very handy amphibious barge service who will drive around Vancouver island and pick up supplies like lumber, roofing, batteries, or water tanks. I think they charge about 85.00 per hour. They launch at the boat ramp in town and drive the barge here to be unloaded. We off load at the island boat ramp as the barge can’t get down the lane to our house but some fortunates can hire the guys on the farm to tow it right to their site with a tractor.

Last year, if you can recall we ended up with two new trucks. One very old, very large F150 and a smaller less old, Dodge Dakota from our son. The very large 1987, F150 is too wide to get down the last driveway to our house. We rarely drive down to the house but if we have to, it’s scary in that truck. It’s too big for me to drive comfortably. I can’t see where I’m going and it greets every island pot hole with a shudder that makes my kidneys quake. But it earns its keep when it can carry three times a normal load of firewood or 1500 gallon water tanks and it only cost us 1500.00.

Some of our family was bringing a barge of supplies yesterday. E offered to tow the barge to their house with the F150. He wasn’t concerned about towing the weight along the roads but was a little concerned that his offer would prove false if the truck couldn’t get the barge up the initial sandy part of the boat ramp.

But sure enough the truck with its four wheel low, had no problem. Roofing, water tanks and supplies were safely delivered. Who needs a tractor. That truck 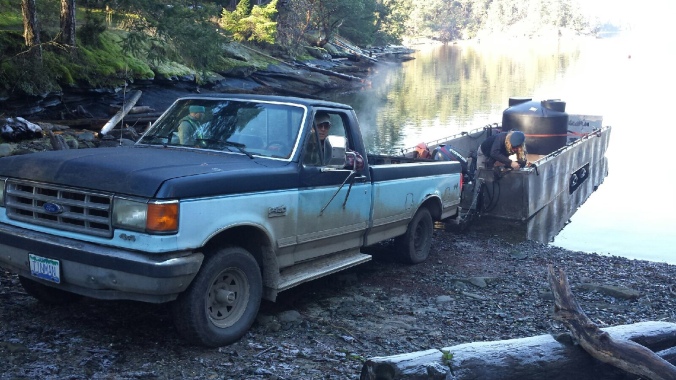