Many of our projects are “almost” complete. Eight times out of ten a project isn’t finished because a part didn’t make it over or we are waiting on another project to finish before we can complete the next stage. When we start each day with many projects “almost” finished I am pleased to report that each day we are in fact seeing progress.

The final part for the chimney arrived on the barge today so we are officially heated. Project complete.

Our interior doors finally arrived today. We have in fact sent the barge three times for our door order. Even with the doors ready and waiting in the store, the entire order never seemed to make it on the barge.. Stores fault not the barge… Now we need to get the paint for the doors and E can install them.. Maybe Tuesday, I will be able to say the doors are complete.

E has all eight solar panels installed on the roof. He was able to install the panels without adding any more holes in the metal than were needed to initially attach the metal to the roof. However, the inverter isn’t working .. don’t know why… but I can’t say solar is complete just yet. Maybe in a few days.

In the meantime he is installing 300 watts on the gen shed with the old panels given to us from Mary. These solar panels will power the water pump. We had a rack left over from our original solar panel setup which we were able to use.. I  should be able to say tomorrow that the water pump project is finished. This will make the water pressure in our shower stronger, and our kids happier when they visit next month.

We had two barges this week with a combined load of 8 thousand pounds. This included lumber for the deck, a fridge, the cedar facia, plywood for the foundation wall, plexiglass for the railing, assorted hardware, and garden mulch. Whew.. it’s a lot of stuff.

Whenever there is a spare inch on a barge, which is rare, I order something for the garden. Although most of the rockery down to the house is piled in debris waiting for burn season I was able to get a start up at the top with the twenty bags of mulch which came today. 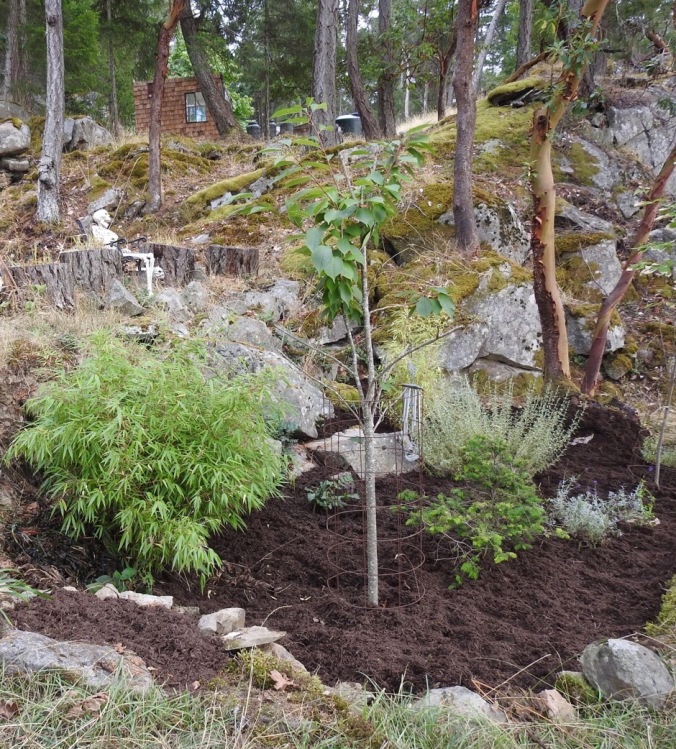 That was our fourth barge. I’m hoping one more will do it..We

12 thoughts on “Aren’t the Rockefellers ”