It was 1975 and I was coming home on the Broadway bus from my part-time job selling running shoes at Olympic Sports. A heavy, loud breathing older man sat down beside me claiming two-thirds of the seat. His brown wool coat smelled of nicotine and it wasn’t long before a laborious wet smokers cough rose deep from his gut. I shrank against the wall of the bus and cringed after each of his gasping breaths.

Forty years later and it was six am this morning living on the nature channel. The rain had stopped, there was no sound of wind and the dog was asleep quietly between us. A sound not unlike the gasping  breath of the old man in the seventies woke us. It could have been in the next room it was so loud but it was in fact right under us. A Steller sea-lion announcing his return.

Like the storied fellow in his night-cap, “I sprang from my bed to see what was the matter”. Although the water was glassy calm it was still too dark to clearly see them swimming under our house. The time changed last week and although it is only November, we have found ourselves in the dark wet days of winter. Or as we like to call it, our favourite time on the island.

I confess with my aching back this week I was longing for a hot bath or two or three. A night in a nice hotel with a bubble bath sounded like heaven. But then I would have missed this weeks return of the big Steller sea lions. I wouldn’t  be writing this with a heron feeding on the rock below me, or four eagles playing off the cliff in front of me. The Flicker, Stellers Jay’s, Towhees, hummingbirds and squirrels would have only empty bird feeders to greet them at dawn. Let’s face it bubble bath or no I have found my happy place and I am not going anywhere. 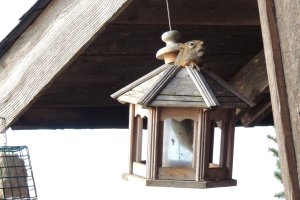 Last night we were having drinks with two of the few other people on the island this weekend. They are new owners and like many others here will tell you, fell in love with its beauty at first sight.. As has happened on more than one occasion visiting here with friends at sunset SM drew our attention to the amazing colours appearing in the sky. At the same time, I received a text from one of the other few islanders commenting on the colours in the sky….

Maybe it is because we are surrounded by large glass windows facing the water. Perhaps it’s because our rooms are sparingly lit by candles or maybe one led lamp. It could be that our senses are heightened with a lack of competition from television or the sounds of traffic or crowds of people. But we all pause to appreciate the sunsets here. They

10 thoughts on “Never get old”