I don’t live in a world which allows me to turn back time. The reality is my hair will always be grey and I will never be welcome again in a Vancouver nightclub on a Saturday night wearing a skimpy green halter dress. My children will never be young again, and my dogs will never again be pups.

We have always owned at least one, usually two and sometimes three dogs.. As long as we have been married, dogs have played an important part in the happiness of our family. Bacardi was our longest living four-legged family member. She lived fourteen years and today we said good-bye. 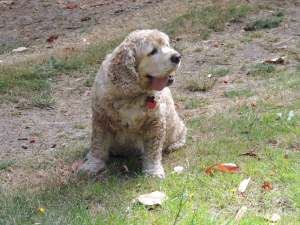 There is no use explaining her loss to someone who hasn’t had a long-term relationship with a dog. Every moment of our lives in the last fourteen years has included her. Photos of the years with the children on Christmas morning always include the dog, Home movies of children opening their birthday presents inevitably include Bacardi in the background playing with the wrapping paper or surreptitiously stealing cheesies from an unattended bowl on the coffee table.

Bacardi seemed to have an endless supply of lives to call upon. She had a stroke in 2010 and we thought we had lost her, She fell off the boat at BH and was trapped between the boat and the dock. She fell off the dock at PC and was caught beneath the piling swimming in a one foot circle two feet below the deck. February of 2013 she fell off the cliff in front of our house and had to be rescued in the middle of the night by our friends in an aluminum boat as the tide rose to her feet.  She was loved by all who met her and I thought she would live forever.

Some people turn to religion or drugs or alcohol when they are sad. We turn to music (and a little alcohol) . Tonight, struck quiet by sadness we watched the concert in the park from 1991 with Paul Simon and Art Garfunkle. We opened a bottle of wine and cried during Bridge over Troubled Water and sang real loud in harmony with Me and Julio down in the school yard. It is how we cope.

We still have one dog and he is going to get lots of extra loving in the coming weeks as we try to get used to the hole Bacardis absence leaves us. As sure as I will never be young again and my children will never again live with me, there apparently can be a

30 thoughts on “shitty day in paradise”