Nurseries, Saltspring Island, water tanks, hockey,  dinner with friends and whales..All in the forty-eight hours since we have been back…….I will try to get caught up…

Yesterday, I tagged along with a friend who needed to run an errand to Saltspring Island. While we were there we visited two or three nurseries. One of the nurseries specialized in rare plants.. By rare they mean expensive.  I did not buy the two-inch $100.00 perennial… That was my defence as I unloaded the several new shrubs that I did purchase…. While CH and I were shopping and lunching on our Saltspring island boondoggle… E and BD were slaving at home.

The water tanks were ready for pickup at the government wharf across the channel from our island. The seas were a little bumpy but it was doable. Once E and BD got the first tank over (B and C’s) , and everything went well, they got confident.. The second trip they took the two remaining tanks (for us) in one load.  Once they got the tanks to the island the difficult part of the day began… They had to get the 84 inch diameter tanks off the boat, off the dock and into the trucks… and then rolled up the hill to the top of the cliff (in the rain) where the water systems are located….  BD and E were soaking wet and exhausted when they met us at the dock. Luckily the R’s made us dinner …. and we were able to catch our breath and get warm watching the hockey game.

Today E slaved again up at the top of the cliffs working on the tanks as the ground beneath them needed to be levelled. The larger tanks need a bit more space than what was there before… When he was finished for the day he met me in the garden. I had been planting my new flowering shrubs and looking at my sad pathetic attempt at growing veggies from seed… We sat in the shade of the umbrella ready to catch our breath and call it a day. We hadn’t sat down for five minutes when we heard them coming….

I said” those are whales”… “there are whales down at the house”  I know the sound now, I have learned. We ran down to the house without our phones but E had the foresight to bring the camera…. and there they were.. (four Orca) .. 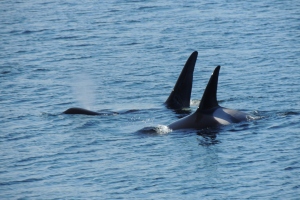 Definitely the closest I have been to Orca here on the nature channel… With all of the seals hanging around the last few days I wasn’t surprised but am happy the whales have decided to come to this side of the Channel for once. I have posted the little video of them in the wildlife video section of the blog…..

Well that is a wrap up of what has been going on…Whew,  I need to catch my breath… Tomorrow  E is working at SoHo but I am going to lunch with all of the women folk at the local pub on the nearby island. Before lunch though I am stopping at another nursery… I think I need to buy some vegetable starts as mine are pathetic and of course just

Leave a Reply to Off the Grid - Islanders Cancel reply