Sitting at the end of the day with a chance to catch my breath and try to put our day into words.. It sounds as though I repeat myself when I claim that today was the best day here yet. But it was about as awesome as they come. You have to read this understanding that as I type the window is open and the sea lions are beneath it by the hundreds… breathing, barking and splashing…

We started early in the morning working in the garden. E is rebuilding the cold frame with the windows from J&S… I continued to weed. But DY called and needed help.. E went with him to BH to get their old motor and bring it to the island. On the way back they wandered up to the Narrows. While the Y’s were sailing through the Narrows yesterday there were a lot of indicators of an impending  herring spawn. E agreed as last night we had no sleep. The sea lions were en masse beneath our window and they were very excited about something…

At the Narrows they discovered the herring had spawned. The waters were white. 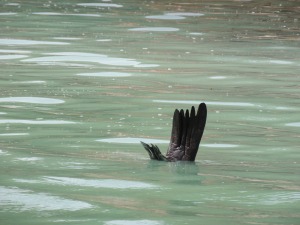 There were hundreds of gulls, eagles and sea lions… Realizing that their lives would be in jeopardy if they didn’t call K and I… They called us.. K and I packed up some beer, wine, and food and met them at PC. We went through False Narrows and down through Dodd… Swinging around Mudge you could see it all happening.

The waters were white and alive with hundreds of sea lions … the skies and trees were filled with eagles. The juvenile eagles almost impossible to discern as they stood on the sandstone by the water’s edge. To see all of the pictures click on Gallery  and to see the video click here…   Herring

We floated through them, trying to take perfect pictures. It was difficult to know where to look.. There were sea lions all around us and it proved almost impossible to have the camera trained at the right spot… There was just so much happening at once… There was one other boat, a native fishery. They were harvesting the roe.. There was no one else to be seen.. The herring was spawning and we were the only witnesses… We stopped for lunch at a bay on Mudge.. We were surrounded by herring gulls feeding on the fish at the top of the water…. hundreds and hundreds of gulls with fish hanging out of their mouths as they flew over the boat….

The trees on Link were covered in Eagles… They and the sea lions seemed to have had their fill for the moment and were taking a break as they rested in the sun…. The coloured water ended half way down Link… Our only hope is that it continues down to our island. The Bay at SoHo would be very convenient….. Beneath our house would be pretty special too.  We can only hope for more tomorrow but for today, our first herring spawn, it

4 thoughts on “was pretty perfect”