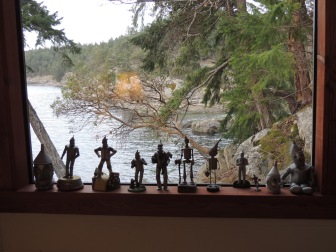 In 1999 when E was carrying a beeper waiting for his new heart, there was a knock at the door. One of our friends arrived with a stuffed Tinman.  “A heart is not judged by how much you love; but by how much you are loved by others” .”For good luck ” they said..  The next week another came to the door with a Tinman figurine…. And they kept coming. It became the good luck theme as we waited for his new heart.

After his surgery when he was safe and sound, E’s brother arranged for him to get a personalized license plate for his car.. TINMAN.

It seemed the logical thing to do when we traded in the car for a boat to name the boat TinMan..

In the summer of 1980, I was looking for a present to give E for his birthday before we spent two weeks sailing around the gulf islands for our honeymoon. I walked passed the fishing tackle store, and Victoria Secret and went into Bowrings. They had exclusive rights to sell a new independent Canadian game just on the market called “Trivial Pursuit” It was 35.00. I bought it and spent my entire (almost) honeymoon asking E trivia questions. As you may recall the rules of the game are that your turn continues until you get a question wrong. E has a mind filled with useless knowledge which he credits to a lifetime subscription to National Geographic. Occasionally he got hungry or thirsty and purposely got one wrong so he could take a break and I would get a turn.  Thirty two years later he can’t remember where he left his glasses but can still tell you what year it is in Ethiopia (Julien Calendar).

While driving an old friend home from a girls night out my friend looked at the TINMAN license plate and seemingly unclear on the The Wizard of Oz movie said to me “I don’t get it. There isn’t anything wrong with his brain”