We went to town. We were running low on some meds and more importantly wine.  The water was flat and the trip was a simple one. Not too much on our list to accomplish.

E was driving our refurbished TinMan, but thought the boat was sluggish and it definitely wasn’t running smoothly at low speeds. The fish well was full of water from a winter in the parking lot at P Marine, so that added many hundred pounds to our weight at the back….Maybe it was the weight, maybe the engine  needs to get the cobwebs cleared off with a few good runs across the channel.

We returned our recycling and ordered the DICA cheque (it’s coming BF) to be cut from the fundraising account. After groceries, liquor store and pharmacy we really only needed to head down to LS to get our propane tanks filled.. Propane was 94 cents per pound instead of the 87 cents  we expected but still half of what we were paying for the convenience of it to be delivered to our door…Couple of jugs of diesel for the generator and we were done for the day… easy sneazy….

I loaded the groceries down while E wheeled the four tanks to the boat at BH one at a time. We had been efficient in our chores so were ahead of schedule. The tide was high, the water flat, weather mild, no reason to rush home…

While E brought the tanks down, I thought I would be useful and empty the fish well. Picture a space built into the floor of the back of the boat.. The size of a short coffin about four feet deep and full of icky gassy water…That’s right.. you guessed it..I picked up the bailer and then slipped in… well only one leg.. but I found myself standing on one leg four feet deep in icky water and the other leg up on the deck of the boat.. Both dogs staring at me from the dock. (Bacardi was sympathetic).  E was up at the car unaware of my stupidity… When he arrived I confessed to him and he just shook his head.. no comment..

With one shoe, one sock and a half a pant leg soaking wet and smelly, I realized I had something to write about in my blog. You should appreciate the lengths I went to 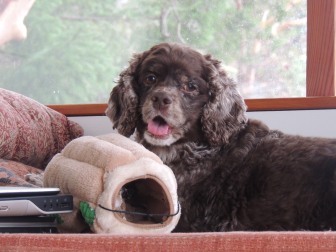 Sammi smiling with his new toy…

16 thoughts on “for your entertainment”