It is the eighth of March. The time changes this weekend, which I accept as a sign that it is the end of winter. 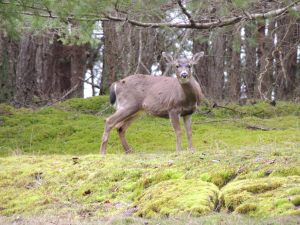 All our preparedness was for not. Full pantry, generator, and wood pile… waiting for the fortold times … stranded (is there such a thing as stranded in paradise?) on the island for days at a time due to high winds, storms or fog. But we have had nothing of the sort.

So now I feel confident to say all risk is over and it is spring.. I know it is spring because the signs were all there.

We went to Papas and took some divisions of some of Guys plants in the garden. I will be returning with divisions from my garden so the cuttings wont be missed.

I  (E) took a sucker off the Hawthorne and Flowering Plum trees to try to transplant. If they work, I will have two beautiful free trees. If they don’t… firewood.

I took a cutting off the forsythia and peony and some Euphorbia. Dividing perennials.. that is spring!

We stopped in at A’s to lend her copies of Les Mis and Argo and she gave me some zinnia and Geema seeds to start indoors. I have shoots coming up for the lettuce and peas I started on Monday. They are sitting in trays on the coffee table at the living room window. Shoots in my seed trays. What is that if it isn’t a sign?

so I spent two hours reading on the perch in a tank top. Sign, I think so.

There was a bumble bee on my chair. That is a sign too isnt it? The batteries are showing fully charged from the amazing sunshine all day, as if it were June. That is definitely a sign!

I did the driving and am getting much better at driving standard.. Still not that good at three-point turns without stalling.. but getting there… The next big thing will be learning to drive the boat.. I will have to wait til E is in a really good mood for that one…

The daffodils were blooming down at Papas.

But the most important indicator  there of all was the sound of robins .